There is beautiful art and architecture hidden all over Downtown Los Angeles, you just need to know where to look to find it.  Next time you are walking at the intersection of Grand Avenue and West 5th Street, take a peek inside the rotunda entrance of the One Bunker Hill Building (home of Torrey Pines Bank) on the northwest corner.  Here you will find a piece called La Family Baroque by artist Bill Barrett.  This bronze sculpture measures 12 and a half feet tall.  Be sure to look up and check out the chandelier and ceiling.  Spectacular! 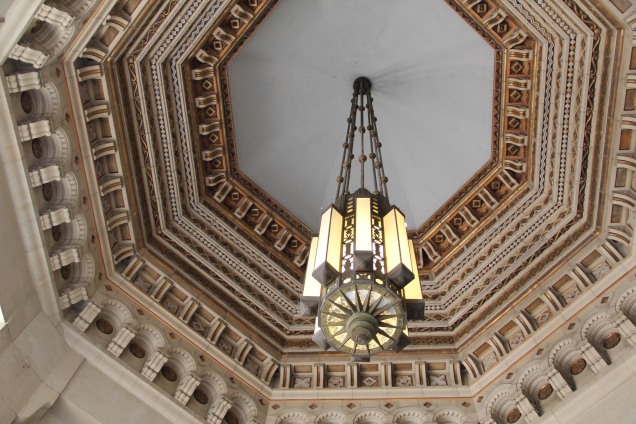 When the One Bunker Hill building went through renovations, the developer was required to add a public art component.  The sculpture was supposed to be the centerpiece for a fountain at the building’s entrance, but when the fountain was removed from plans, the piece was relocated to the rotunda. 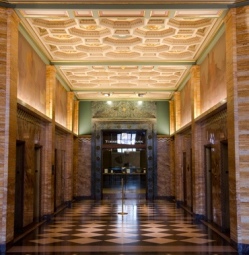 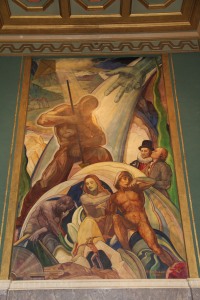 Well, as long as you are there, take a look inside the building’s lobby.  It’s even more spectacular.  One Bunker Hill was built in 1931 and originally home to a utility company.  The building was one of the first all-electrically heated and cooled buildings in the western United States.  The two-story lobby is open to the public.  Inside you will find thirty-foot high coffered ceiling.  The floors and walls are made of at least seventeen different types of marble. At the far end of the lobby is a 1930 mural by Hugo Ballin titled “The Apotheosis of Power.”