Finally, after years of waiting the Los Angeles State Historic Park officially opened on Earth Day (April 22) 2017.  The California State Park system acquired the land back in 2001 and it has taken all this time to transform the area into a 32-acre park.  The land is the former site of the Southern Pacific Transportation Company’s River Station dating back to 1876.  It was called the Ellis Island of Los Angeles because this is where people migrating from the east arrived in Los Angeles.  Corn stalks sprouted up on the land over the years and the area was referred to as “The Cornfield.”  Years later, in 2005, the area was actually turned into a massive cornfield for an art installation called “Not a Cornfield.”   Some people complained the art project delayed the construction of the park, but others says the project left behind fertile soil that allowed for the park we have today.

Los Angeles State Historic Park is located between the Metro Gold Line tracks and Spring Street, at the north end of Chinatown.  The Chinatown Gold Line Station is a few hundred feet from the park’s entrance.  If you decide to drive to the park, there is a paid parking lot (although you can park along Spring Street for free). 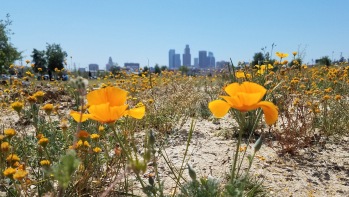 The main feature of the park is the circular ramp in the center of the park that gives you a spectacular view of the DTLA skyline.  There are trails that are lined with wildflowers, and large grassy lawns for playing catch or relaxing.  What the park is missing is shade, either from trees or pavilions, but hopefully that will come in the months ahead. Original plans for the Los Angeles State Historic Park called for water fountains, an ecology center with restored wetlands, and even an upscale restaurant but those features were tabled because of budget cuts.  There are signs for a “snack shack” called Cargo “coming soon” near the main entrance to the park. 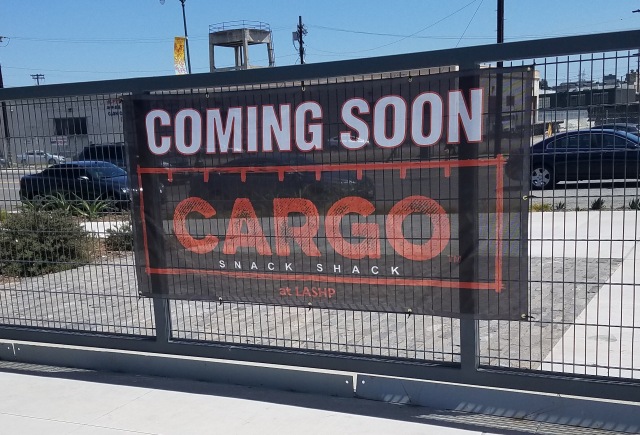 The park is open from 8am to sunset every day.  It’s the perfect place to escape the city for a few hours.  Dogs are allowed, as long as they remain on a leash.

Come along as we explore all the Downtown Los Angeles has to offer!
View all posts by DTLAexplorer →
This entry was posted in Uncategorized. Bookmark the permalink.