OCTOPUS SUSHI HAS SOME TOUGH COMPETITION HERE IN DTLA

Posted on January 5, 2017 by DTLAexplorer 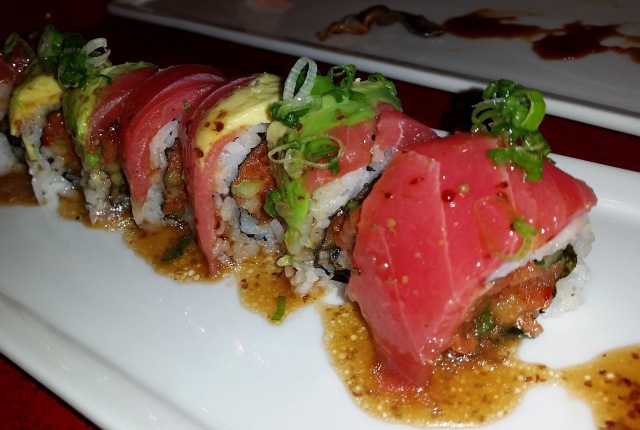 Although I have walked past it hundreds of times, I have never eaten at Octopus Japanese restaurant on 7th Street across the street from The Bloc.  I’m not sure why.  The place just does not register on my sushi radar.  Well, on New Year’s Day I was craving sushi and my go-to sushi restaurants where all closed for the holiday, so we ended up at Octopus. 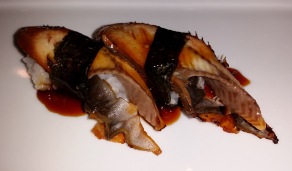 My husband ordered his favorites,  yellowtail ($3.75) and unagi ($4.25) sushi.  To say he was disappointed in the unagi was an understatement.  In fact, he disliked it so much, he didn’t even eat the second piece, leaving it behind.  We also ordered the Spicy Tuna on Crispy Rice ($6.95).  The spicy tuna mixture was good and spicy, but the crispy rice portion not so much. 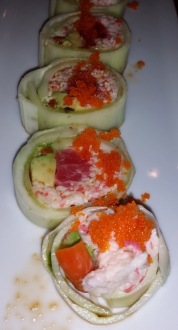 We also got the Yammy Skinny Roll ($12.95) made of krabmeat, tuna, avocado, kaiware radish sprouts and gobo all wrapped in cucumber.  I ordered this “skinny” roll because there is no rice and I was trying to eat healthier, but the fake crab meat mixture contained a lot of mayo. It was good, but probably not that “skinny.”

We did enjoy the Red Dragon Roll ($11.45).  It was their good spicy tuna mixture in a roll topped with tuna and avocado.  A photo of it is at the top of this posting.

I also got the Octopus Chef’s Special Plate ($19.95) made up of six pieces (two each) of tuna, salmon and albacore sashimi, plus salmon, unagi, shrimp and yellowtail sushi, and a spicy tuna hand roll .  All this, plus a roe bowl of four different type of roe over white rice.  This was a lot of food for a great price.  With the exception of the unagi, we liked everything on this platter.  I especially enjoyed the roe bowl.

Octopus is a Japanese restaurant chain with 8 locations across Southern California. Maybe in some neighborhoods Octopus is considered a good place for sushi, but here in DTLA the place is just average.  Octopus has some tough competition in DTLA, like Arashi Sushi in South Park, Kazu Nori on Main Street, and the super expensive Q Sushi just down the street.