Posted on December 1, 2016 by DTLAexplorer 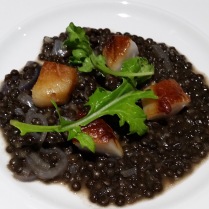 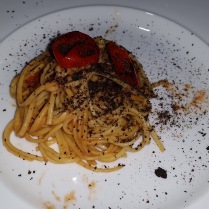 Monday nights are kind of quiet in DTLA.  Well, until now thanks to ANT.  It’s a weekly DTLA dining event that only happens on Monday nights.  ANT is the creation of chef Giacomo Dalmonte.  His experimental dining experience is made up of locally sourced, organic and wild ingredients.  His menu is filled with unique ideas and flavors, that are combined together.  It is one of the best meals I have eaten in DTLA in a long time.

ANT is held at Woodspoon restaurant on 9th Street just west of Main Street.  It’s a small simple space that seats about 25 people.  This is the epitome of a locally owned restaurant, like something you would find in NYC or San Francisco.

My husband and I ate there this past Monday night.  The staff was extremely friendly and eager to explain the chef’s vision.  The menu is limited with only about 12 options, but the selections range from a Salad Bouquet and Black Lentils Stew to Buffalo Heart Tagliolini and Juicy Elk Tenderloin.  The prices are descent, ranging from $11 to $25.  At first, we said, “No Way” to the more exotic dishes, but them we agreed that we needed give them a try. That’s when we both decided to try the “excursion” tasting of 10 dishes (all four appetizers, your choice of of the two pastas and two of the proteins proteins plus both desserts) for $100 each.  Yes, that’s a lot of money, but when was the last time you got to order buffalo heart?

Before our tasting menu started, they brought out the most delicious ceviche dish compliments of the chef.  It was the best ceviche I have ever eaten, simply amazing.  The chef then personally delivered another complementary dish, pumpkin puree topped with coffee. He was so excited for us to try it.  His passion for his food was obvious as he told us about finding the pumpkin at a local farmer’s market.  I know, pumpkin and coffee sounds like an unusual pairing, but it was delicious. 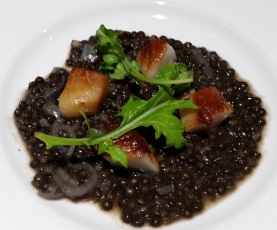 Then the “excursion” officially started.  First up was the Black Lentil Stew with Seared Scallops.  It was followed by something called a Salad Bouquet.  It was a variety of lettuce wrapped up like a beauty pageant winner’s flowers.  Both these dishes were as delicious as they were beautiful.  Chef Dalmonte knows how to present food.

Then came something called Pomodorology, which is described as a study on tomatoes. This dish was simple, several different kids of tomatoes scattered on a plate.  It may sound boring, but the flavors were awesome.  The next dish was called The Pond.  It was watercress, escargots and mushrooms… and again, it was another hit.

Our first pasta dish was the Calamari & Calamari.  It was a tube of pasta that looked like calamari filled with chopped calamari and topped with a clam chowder foam.  Again, amazing.  Our next dish was the buffalo heart.  We waited a long time for this dish to come out, and then finally the server came to the table empty-handed and told us the kitchen has run out of the buffalo heart.  What?  I’m not sure if we were more disappointed or relieved.  In it’s place they brought us a serving of the Organic Wheat Spaghetti with Anchovies and Roasted Tomatoes.  Neither of us are anchovy fans, but we liked it.

Believe it or not, there are still four dishes left.  Next was the Eel Parmigiana.  You guessed it… instead of veal the chef uses saltwater eel.  It looked great, but neither of us cared for the eel.  There were just too many soft bones it in.  Yuck.

Our final protein dish was the Juicy Elk Tenderloin with Pomegranate.  The presentation was spectacular, a combination of a masterpiece artwork and a crime scene.  And although I didn’t think I was going to like the elk, I did enjoy it.

The food parade ended with both desserts from the menu.  The chef brought out the Persimmon Ice Cream with Lemon Cream and Licorice.  He once again told us how he found these delicious persimmons at the market and turned them into ice cream.  That was followed by the Goat Cheese Cake with Caramel Asian Pears.  It was deconstructed, beautiful and delicious. 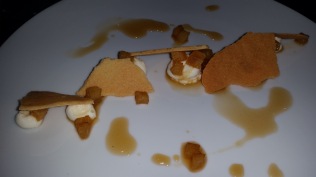 We got a lot of food for our $100 each… a lot of amazingly beautiful and delicious food. Yes, we were disappointed that the kitchen ran out of the buffalo heart, but the rest of the food and great service made up for the error.  If you are looking for a special dining experience, we highly recommend you check out ANT.