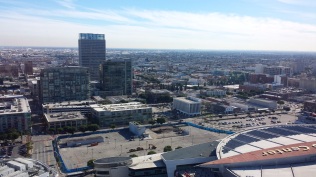 After getting off to a rather slow start, construction is finally underway at the site of the future Oceanwide Plaza across from Staples Center.  The project at the 4.6 acre parking lot was originally named Fig Central but changed a few months ago.  Upon completion, the complex will feature a 49-story super-luxury residences within a five-star hotel tower, two additional contemporary glass condominium towers plus 200,000 square feet of commercial space that will feature an outdoor shopping center and restaurants.  The complex will be wrapped with a massive LED that measures more than 32,000 square feet. 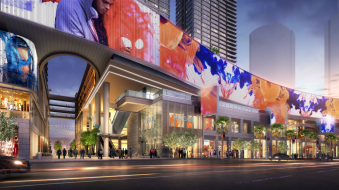 Early reports that the luxury hotel will include a Cavalli Club fell through.  Although the North Tower’s condos are expected to go on sale starting in 2017, the full Oceanwide Plaza project will be completed by 2018.

The Oceanwide Plaza site is flanked by Figueroa and Flower Streets between 11th and 12th Streets.  As you can see in the slide show (below), the land was used as Staples Center parking lot #7.  Demolition of the parking lot started in December 2014 and by early March 2015 it was transformed into a massive dirt hole.  The massive concrete pour of the foundation happened in March 2016.