Posted on October 3, 2015 by DTLAexplorer

After years of waiting, Clifton’s Cafeteria has finally reopened.  As you can imagine, the opening weekend crowds are crazy.  We waited in line for about an hour this afternoon with hundreds of other people who wanted to see inside the DTLA landmark.

When we finally were allowed inside, we headed straight to the cafeteria line.  After you pick up your tray (just like in elementary school) you head around to different stations and pick your food, but the lines to the different stations were unorganized and confusing.

We waited in the carvery line for about 30 minutes for the “Thanksgiving dinner… daily.”  It’s your choice of ham, turkey or roast beef with two sides ($12).  Apparently they ran out of food, although no one bothered to tell the people waiting.  When they finally brought out more food the line had grown so chaotic it wasn’t worth battling the crowd.  It was a similar situation at the sandwich station, where the sandwich maker was slapping together sandwiches faster than the crowds could snatch them.  We were able to snag a prosciutto sandwich and side orders of quinoa salad and macaroni & cheese.  Oh, and of course we grabbed a bowl of cherry Jell-O.  Once we made our way through the cashier line, things got better. 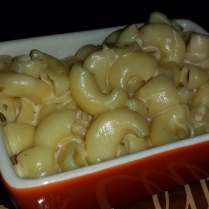 The dining area is cooler than ever.  There is ample seating surrounded by a variety of taxidermy animals (bison, bear, lions, etc) and faux trees.  Be sure to check out the bar area in the back of the second floor with the giant redwood tree fireplace.  There is an additional large dining room and another beautiful bar on the third floor.  There appears to be yet another bar area on the 4th floor, but it was not open during our visit. 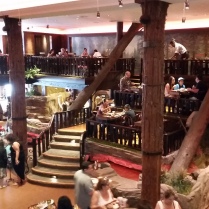 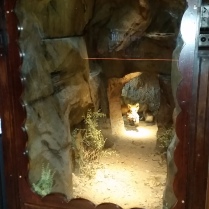 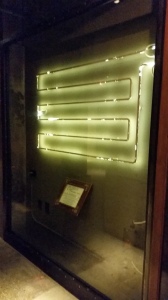 You must head downstairs to the basement.  That’s where you will find the restrooms, but also the oldest continuously active neon light in the world.  It was installed in the mid-1930’s and it has been lit ever since (except during power outages).

I hope the management team at Clifton’s is taking notes this weekend and are able to solve the problems with the kitchen and cafeteria lines.  Once they get things running smoothly, Clifton’s Cafeteria will be awesome.