Posted on October 2, 2015 by DTLAexplorer

I’m not a fan of Rock’n Fish restaurant at L.A. Live.  I’ve eaten there before and was quite disappointed, but I decided to give the place another try.  Big mistake.  When we arrived the restaurant was nearly empty.  There is a big beautiful dining room, but for some reason the host sat us in back of the bar.  I spent my entire time facing a wall even though there were dozens of other open tables.  Strike one.

The restaurant’s website boasts “America’s Best Regional Cuisine at L.A. Live.”  Well, they certainly didn’t serve it to me.  I started with a small size bowl of New England Clam Chowder ($7.95).  It was boring and it barely contained any clams.  Strike two.  I also ordered the Popcorn Shrimp ($14.95).  I’m not sure why they were called Popcorn Shrimp.  This was your basic normal size fried shrimp… and the batter on some of the shrimp was still pasty.  Strike three.  The restaurant’s website reads, “You are guaranteed a great meal. It is our mission to send you home satiated and smiling.”  In my opinion, they were not even close. 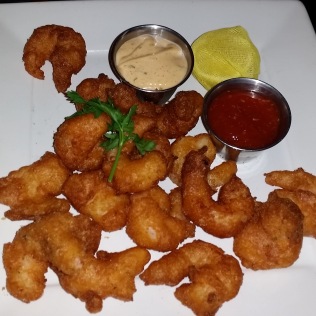 There are a few (very few) positive things to say about Rock’n Fish.  Our server Lena was great.  She was friendly and attentive.  My husband ordered the Ultimate Burger ($16.95).  It was two fresh ground chuck patties with double melted cheddar, dill pickles, lettuce, tomato and spicy rémoulade on a brioche bun.  It was served with a side of French fries.  It was not the best burger and fries ever, but it was fine.

There are so many other restaurants at L.A. Live that I enjoy (Tom’s Urban, Triple 8 China Bar & Grill, Lawry’s Carvery, Smashburger, Live Basil Pizza, The Farm of Beverly Hills and Ford’s Filling Station) that I will not be giving Rock’n Fish another try.